Applications in the field of health

Back to team R

Over the past two decades, antibiotic resistance in many pathogens, including those involved in hospital-acquired diseases, has been on the rise. In 2016, Margaret Chan, Director General of the World Health Organization, called this resistance “a global crisis, now recognized as one of the most important health threats”.

These bacteria are able to accumulate in a hydrophobic biofilm that adheres to surfaces such as medical devices. Often these infections become chronic as the immune system is unable to rid itself of these microorganisms.

Given the difficulties encountered by conventional antibiotics in treating certain infections, particularly those caused by biofilms, there is an urgent need to develop new therapies to combat antimicrobial resistance.

Nitric oxide has bactericidal properties and is described as being able to induce the dispersion of bacterial biofilms.

The controlled release of the bactericidal agent by light makes it possible to imagine new targeted and controlled therapies. 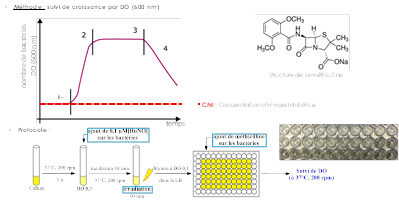 Staphylococcus epidermidis ATCC 35984 is resistant to methicillin and is capable of forming aggregates and biofilms. The trans (NO,OH)-[RuFT(Cl)(OH)(NO)]PF6 complex has been tested on this strain and does not show toxicity without irradiation. In contrast, the use of 0.1 µM of complex and irradiation of the treated bacteria decreased the viability of both strains by about 50%. The combination of this NO•donor with methicillin was then studied.

After treatment of the bacteria with the trans(NO,OH)-[RuFT(Cl)(OH)(NO)]PF6 complex and irradiation, the minimum inhibitory concentrations of methicillin drop by a factor of 100, which is a major result. Nitrosyl-based ruthenium complexes are therefore promising candidates for combating bacterial resistance.

Evolution of the bacterial growth (a); bacterial colonies without (left) and with antibiotic treatment (right) (b).